I seldom write reviews, but the fact that I'm comfortably getting by with total mobile costs of £10/month, while others seemingly pay several multiples of that, compels me to do so. So here it is, my review of Giffgaff after being a customer for over eight months two years:

Basically, I'm impressed. Giffgaff operate on the O2 network, so they benefit their infrastructure and signal quality, which seems to be pretty decent. At least it's been rare that I've not had a 3G signal down here on the south coast, even in fairly rural areas. Anyway, this article is mainly to get you thinking about whether you need to be tied to that (expensive, long) mobile phone contract. In short, on giffgaff I'm currently spending £10/month in total including 1 GB data, with no contract or hidden obligations. You order a SIM card (for free), it arrives, you top it up, and you forget about it. You can even get £5 of free credit when you activate.

So how do I get by on a tenner? Simples:

Yes, that's 500 anytime minutes; not too shabby for a tenner a month. 1 GB of data is plenty for me (I tend to use a couple of hundred MB/month), but those with a less satiable appetite for data may want to stretch to 12 quid, which will net them the following:

So you lose out on the minutes front, but gain on the data.

"Pah!" I hear you say - "Unlimited never means unlimited!". Well you're obviously right, considering the finite nature of most things, and the requirement for businesses to make a profit in order to stay in existence. That being said, giffgaff do seem to be extremely generous with their unlimited offering. On this page you'll find plenty of detail around their fair usage policy, but the gist is:

if you use more than 1 GB of data per hour you may be investigated.

You've really got to go some to download over 1 GB in an hour on a phone! But if you're thinking that you might need to, then you're likely interested in Tethering on giffgaff.

You may be wondering how a network imposes a monthly limit if you have no contract, and you probably want to avoid having to top up every X weeks, or use Y amount of credit per month, to qualify for your inclusive minutes & data. Giffgaff have tried to create a simple solution to this in the form of a "goodybag".

The giffgaff goodybag is essentially a pre-packaged mixture of data, minutes and SMS allowance that lasts for one month. The £10 goodybag gets you all the above, the £15 gets you even more, and so on, up to a maximum of 1500 inclusive minutes (which is £25/month). If you're not in need of unlimited data, there's also a £5 goodybag that gets you a bunch of free minutes and SMS.

When the goodybag expires, you still fall back to your regular "credit" balance, like a normal PAYG arrangement; that is - you don't have to buy a goodybag. The regular PAYG tariff is still very competitive:

These charges are very reasonable indeed compared to the competition, but if you require a lot of data in the long run you're probably better off with a £10 goodybag. Basically my goodybag covers all my normal usage, and my balance is kind of a backup, for when my goodybag lapses, or if I want to do something not covered by a goodybag, like texting a foreign number. Also, bear in mind that you can set up auto-topups, so you can totally avoid any "running out of credit" situation. Also, giffgaff warn you by text before your goodybag expires.

The great thing about the goodybags is flexibility - if you're away on holiday and your goodybag expires, it doesn't really matter; you're actually saving money because the allowances (like a contract or PAYG deal) won't apply when you're abroad. So you can buy a goodybag as and when you need one. But if you do want to avoid the hassle of logging in and buying one every month, just set it to recur automatically (see below): 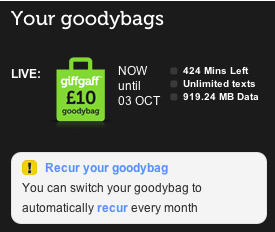 Goodybag's aside - the free calls to other giffgaff members make it a bit of a no-brainer if you're buying phones for your kids or partner.

So do you really need a contract?

This may be a newsflash for contract owners: PAYG tariffs have changed! giffgaff isn't the only operator offering unlimited data on a PAYG tariff; and you've heard of Skype right? Well:

I'm not sure about the feasibility of VoIP on 3G, but presumably this will improve over time, or with the introduction of 4G. But anyway, they have wifi in cafes now you know? And malls, and even train stations. What's more, they have it in other countries too.

Few people seem to break down the real cost of their contract. Don't pay £35/month just because you can afford to. Let's face it, most people can afford to. But the conditions for contracts seem to have got substantially worse in the last couple of years (remember 12 month contracts?). Here's a patronising formula for you:

Or, more likely if you're currently looking at an iPhone 5, something like:

Over One Thousand Quid for a phone? What does it do? Give you an Indian head massage before bed? Unless you need more than 500 mins of call-time, you could be spending just £240 over 2 years on giffgaff (or £264 if you need unlimited data). And if you do need more than 250 mins, get a bigger goody bag: 400 mins for £15.   "Have you seen the price of iPhones? They cost hundreds anyway!" You definitely do pay handsomely for the latest & greatest gadgetry, but at the same time you can pick up some very capable devices for no more than £200. You can often grab yourself a real bargain on ebay, as many people keep their phones in excellent condition.

There's also the lack of flexibility. 24 months? Some marriages don't last that long! What if you take a job abroad for a few months, or go traveling? (you have seen the foreign call charges right?) You're gonna want a local SIM, with data allowance, which (maybe surprisingly to some ripped-off Brits), pretty much any country will provide you with. I've been to Vietnam and paid less for data than I would here; just buy a local SIM (often free), plug it into your phone, and bask in the glory of not having a pointless UK contract.

The main point is: think about the total cost of ownership of your contracted handset.

Giffgaff will boost your credit by £5 if you sign up through an existing member, like me for example!

The free fiver will be added after you've activated the SIM and made your first top-up, which is done online and takes no time. I also get £5 credit, so everyone's a winner :)

Will giffgaff work with my iPhone?

Yes. giffgaff will work with any iPhone version. Importantly, it will even work with an O2-locked iPhone (which many are), since giffgaff operate on O2. I'm not an iPhone user, but it sounds as though you simply need to send a text message to giffgaff, and they reply with the settings for your iPhone. More details here: Does giffgaff SIM work with locked O2 iPhone?

Here's an important point though - Giffgaff do not directly hand out Microsims or Nanosims.

This is no longer the case; you can now get the Micro and Nanosims directly from giffgaff using the regular SIM order page.

If your iPhone is locked to a network other than O2, then you will need to get it unlocked first. Sometimes the network will do this officially, for a charge. Apparently Orange do this:

And less "official" methods do exist. giffgaff have recently added a very thorough guide to legitimately unlocking various handsets (including the iPhone), which can be found at http://giffgaff.com/unlock. It covers all the major UK networks.

The automated setup via SMS is also available for most Android-based phones.

Ultimately, giffgaff intends for their data-only "gigabags" to be used for tethering (or tablets).

How is giffgaff so cheap?

Obviously I'm no expert in the financial operations of a telecoms provider, but I think it has something to do with their "community" business model. They encourage users to contribute to support issues (such as setting up internet on your Android handset, or the iPhone thread linked to above), and then reward contributors with "kudos" points, which can be exchanged for cash or credit at a later date. They also have a referral scheme, offering customers £5 of credit for every friend they sign up. Yes, I'll get a fiver if you click the link below and sign up :) Why else do you think I'm spending 45 mins on a Tuesday night writing about this crap? Actually, I'll tell you why: it's because I get the feeling that giffgaff relies on this kind of promotion. So I'm spreading the word - I think it's called viral marketing? Basically, I don't want giffgaff to go bust because they're saving me a load of cash! Plus the more people there are on giffgaff, the more free calls I get!

Well there's the famous giffgaff outage of 2012. Okay so it's not that famous, but it did last a few hours. The upside was that everyone got their calls/texts/data for free once they'd zeroed the rates. In reality all operators experience outages, and I haven't noticed giffgaff being worse than Orange or Vodafone who I've been with previously. Obviously whenever O2 has a problem, giffgaff has a problem.

One small gripe. A couple of times I've been blocked from certain websites because of "over 18 content" (a bookies website in this case). Anyway, I shot them a message through the online login on their website and it seemed to clear the issue.

I can't really speak for their customer support quality, because I've had no issues. I am a fan of community-based support; you'll often get a faster and more intelligent response than from someone in a generic call centre who's handling calls for hundreds of companies(!). But I guess if you're the kind of person that likes to phone someone up and ask "how do I fix my phone?", giffgaff might not be for you. Although for all I know, their phone support is great.

UPDATE Yes it seems they don't offer phone support (as I suspected), and I guess this a major factor in keeping costs down.

Well I would give giffgaff 5/5 on account of the value, but piggybacking on another network does introduce another level of complexity - so I'm taking it down one notch. Hopefully giffgaff's offers will increase competition in the non-contract market.